The history of the Johanna Engelina 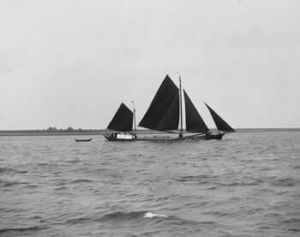 The Johanna Engelina was launched in Middelburg in 1897, most likely under the name “Daniël Jacoba” commissioned by Hendrik Viergever from St. Annaland and named after his parents. It was built by Borsius & v.d. Leye in Middelburg. Her sizes were then 37.45 x 6.84 x 1.91 mtr. and 271 tons. At the time, the client opted for a heavy and robust ship because he wanted to transport cargo between the then Zeeland islands. These waters were known for their boisterous character and only a very seaworthy ship would have a long life here. The Johanna Engelina was given considerable dimensions: a length of 38 meters and a width of 7.5 meters. In addition, the ship was mainly solidly built, based on heavy structures and thick sheet materials. During recent renovations we came across some constructions that would not look out of place for a real seagoing ship. In addition, measurements showed that the hull is still 8 mm thick in some places.
After the launch, the Daniël Jacoba transported bulk goods such as sand, manure, grain and other agricultural products. This was of course done with the help of only the sails; it wasn’t until the 1930s that an engine was built in.

Pieter Theunisse soon came on board as a servant. 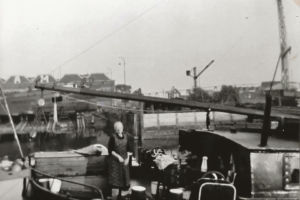 After a few years, he sailed

as skipper on the Daniël Jacoba in the “turn”. And in 1907, he was able to buy the ship. Pieter Theunissen soon came into contact with Jenneke Pieterman, with which he later married. From this marriage came several children of which Jan and his sister continued to sail after the death of their father in 1946 until the 1960s. Before the war, an 18 HP Deutz was already built into it, which made sailing considerably easier. Also during the war the ship sailed until the Germans threatened to confiscate the ship. Then it was decided to dry the ship in a dead arm of the Waal, near Haaften, with extremely high water. As a result, the ship was spared and after the war it was able to sail quickly with cargo again. In the late 1950s, the Deutz was replaced with a 100 HP Daf and the payload 336 tons.

With the installation of the engine in the 1930s, one by one the sails disappeared and a wheelhouse came on the aft deck. According to the measuring letter, the ship was renamed five times between 1960 and 1977, from Daniël Jacoba to Pieter, to Jo-Ba, to Rita, to José and finally to Johanna Engelina.

In the late 1970s, Jelte and Annelies Toxopeus bought the “Jose”. They found the ship in Nederhorst den Bergh in the Vecht where it was used as a transshipment ship with a large crane on the foreship.
The reason the ship was for sale had a tragic cause. The daughter of the selling party (called Jose) had died in a traffic accident a few months earlier. Overwhelmed by grief, the father no longer wanted anything to do with the ship named after his daughter and sold the ship to Jelte and Annelies Toxopeus.
They initially used the ship to live on. Jelte worked with Rijkswaterstaat on the delta work and so the house could be placed next to the work. But gradually the ship was rebuilt and transformed into a charter ship and sailor. At that time they also gave the ship its current name “Johanna Engelina” after their two mothers.
Until 1994 the ship remained in their possession but the commissioning of the 2 new ships “Nirwana” and “Waterwolf” made their decisions to sell the “Johanna Engelina”. Jan Schoen became the new owner of the ship until Laurens Oranje took over the ship from him in 1998.